Uncover Secrets and Treasures from A World Gone Past

Test yourself and embark on a captivating treasure-hunting journey

Treasure hunt in an envelope leads to a mysterious treasure.

Treasure hunt in a box based on a true story. 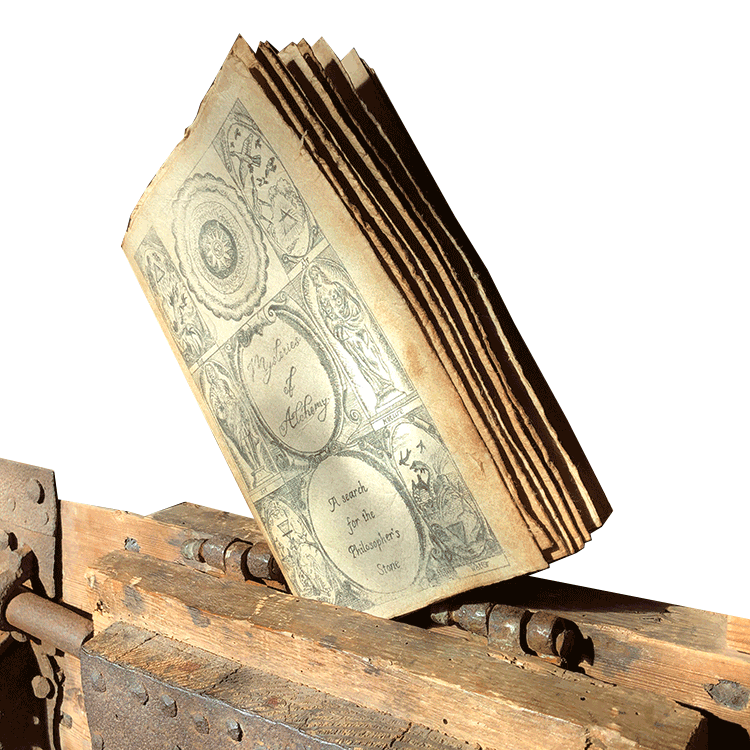 A mysterious treasure hunt and puzzle adventure. Think of it like an escape room you can do at home! In this game you’re searching for hidden clues and puzzles in beautifully created notes from an alchemists’ apprentice.

This is a story of a teenage boy named John Kleyne or as his fellow alchemy students would call him Little John.

Multiple puzzles can be solved at any time during the game. Although you can choose to be the only treasure hunter, a group of 2 to 4 people is recommended. This treasure hunt is for people from 14 years and older. 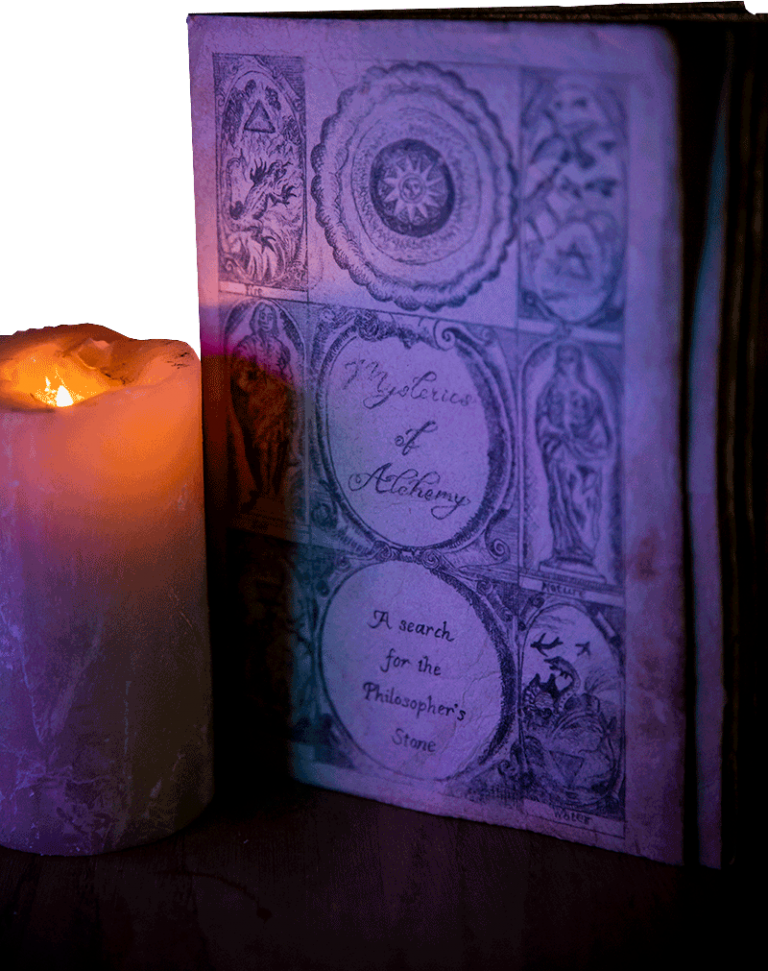 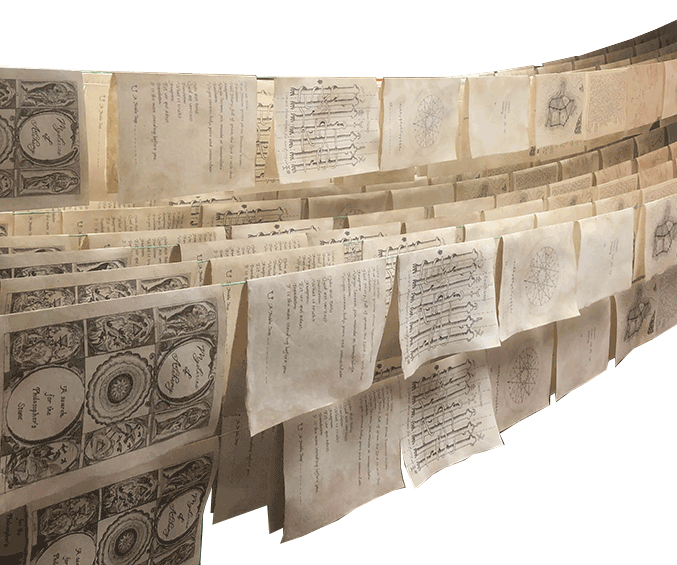 All Mysteries of Alchemy Collector’s Edition have been manually aged and printed on hand pressed paper by the creator Jachin Letwory. (all with great attention to detail and quality)

Each game has 15 different sheets of paper and each paper had at least three steps in the creating process.

4 different options to choose from

Mysteries of Alchemy Premium Edition: printed on hand pressed paper. You can manually age the game yourself (order now €49,95)

Note!! Each version uses the same online system to get hints and validate answers. 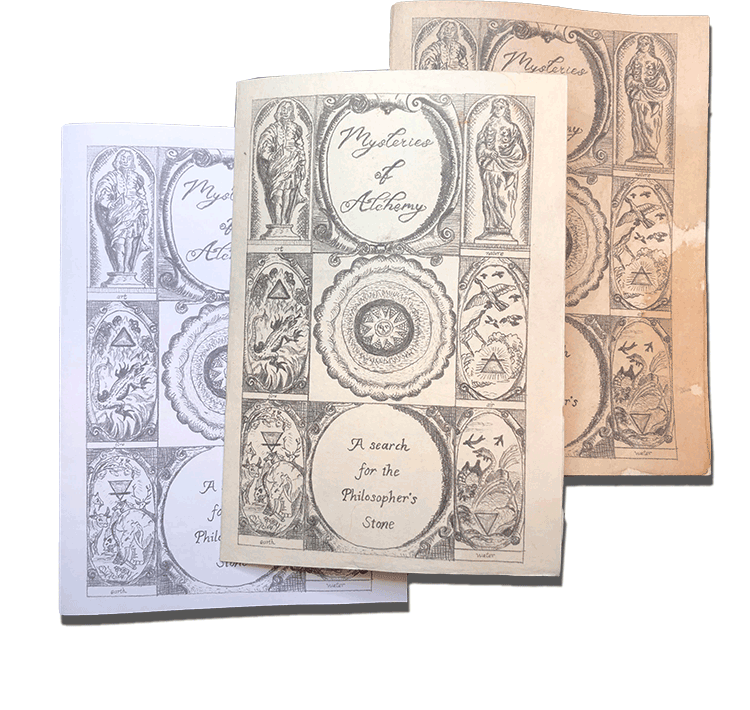 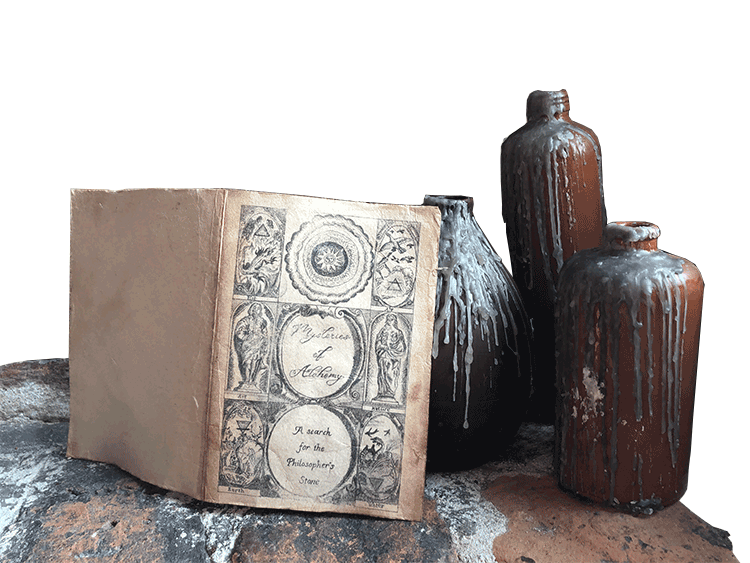 Most frequent questions and answers

For how many people is this escape game/treasure hunt?

You can easily play it alone but it’s better to play with 2 to 4 people.

How big is the game?

Mysteries of alchemy has 14 sheets of paper. Some with prints on both sides. There is one mysteries extra piece of paper somewhere in the game.

How is it shipped?

Because all the papers fit in an envelope I can send it pretty cheap to everywhere in the world. There’s no track and trace option.

It depends on you writing on the original sheets of paper or of you print the .pdf version and use those for solving the puzzles.

But remember that you yourself can play it once because after playing you know all the answers.

You can give your copy to a friend or family if you haven’t written on the original.

Yes and no. The story is about treasure hunting and you have to solve puzzles, find clues and decode ciphers. In this game the theme is Alchemy.

Is there an online component?

Yes, you’re talking to Butler James in a messaging system. He is there to help you when you need a hint and you can validate your answers with him.

What is the story of Mysteries of Alchemy

This is a story of a teenage boy named John Kleyne or as his fellow alchemy students would call him Little John.

As alchemists’ apprentices one of the many things they were trying to discover was chrysopoeia, the art of turning base metals into nobel metals like gold. This process symbolically indicates the creation of the philosophers’ stone.

One by one the students had interesting discoveries. But once a student told the alchemist about his discovery this student would disappear. At first it didn’t seem alarming to the other the students but in the following months, other students would just simply vanish in thin air, after they made a discovery.

Weeks went by before another student made a great discovery and he shared it immediately with the alchemist. It was a joyful moment in the middle of a wet and rainy week. Later that night, John had to clean some things and walked around the shed which the apprentices used for sleeping. It was still pouring rain when he heard some cracking sound coming from the woods. Over a couple of months the neighbourhood had some problems with wolves, so John hid himself behind a pile of chopped wood. He peeked through a hole between some larger logs and he was surprised to see the alchemist sneaking out of the woods holding a shovel. John thought to himself how strange it was and started thinking about the missing students from earlier that year. His curiosity took over and he waited five minutes after the alchemist entered his house before John cautiously followed the trail of wet and muddy footsteps into the wood. John had always been afraid of this dark and mysterious place but some strange force from within kept him going. Totally wet, he suddenly arrived at a open circle in the wood. Stones were placed in a circle and in the middle of the circle he found something that looked like a freshly dug grave….

Treasure – John knew immediately that he wouldn’t be safe if he shared his discovery with the alchemist. Earlier that week he was getting more and more close to creating something really valuable. It was only a matter of days before John would discovered the complete and correct process of (***** spoiler alert).

Abraham, his best friend among the students always told him stories about treasures maps with clues, puzzles and immense hidden treasures. What if hid his discovery in his notes like some kind of a treasure map and never tell the alchemist…? 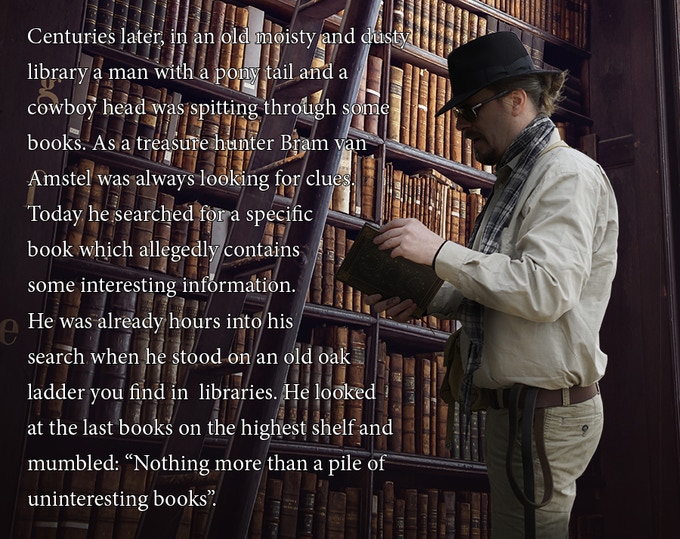 He reached over to get the last book. It was just out of his reach so he leaned over a bit more. The ladder made some strange and dangerous noises when he almost lost his balance. His index finger hooked behind the top of the book when he slipped. The book fell down and with an acrobatic move Bram prevented himself from falling. Hanging onto the ladder he saw some old looking papers dropping out of the book on the ground. “Really, are those the papers I was looking for….?”

By continuing to use the site, you agree to the use of cookies. more information